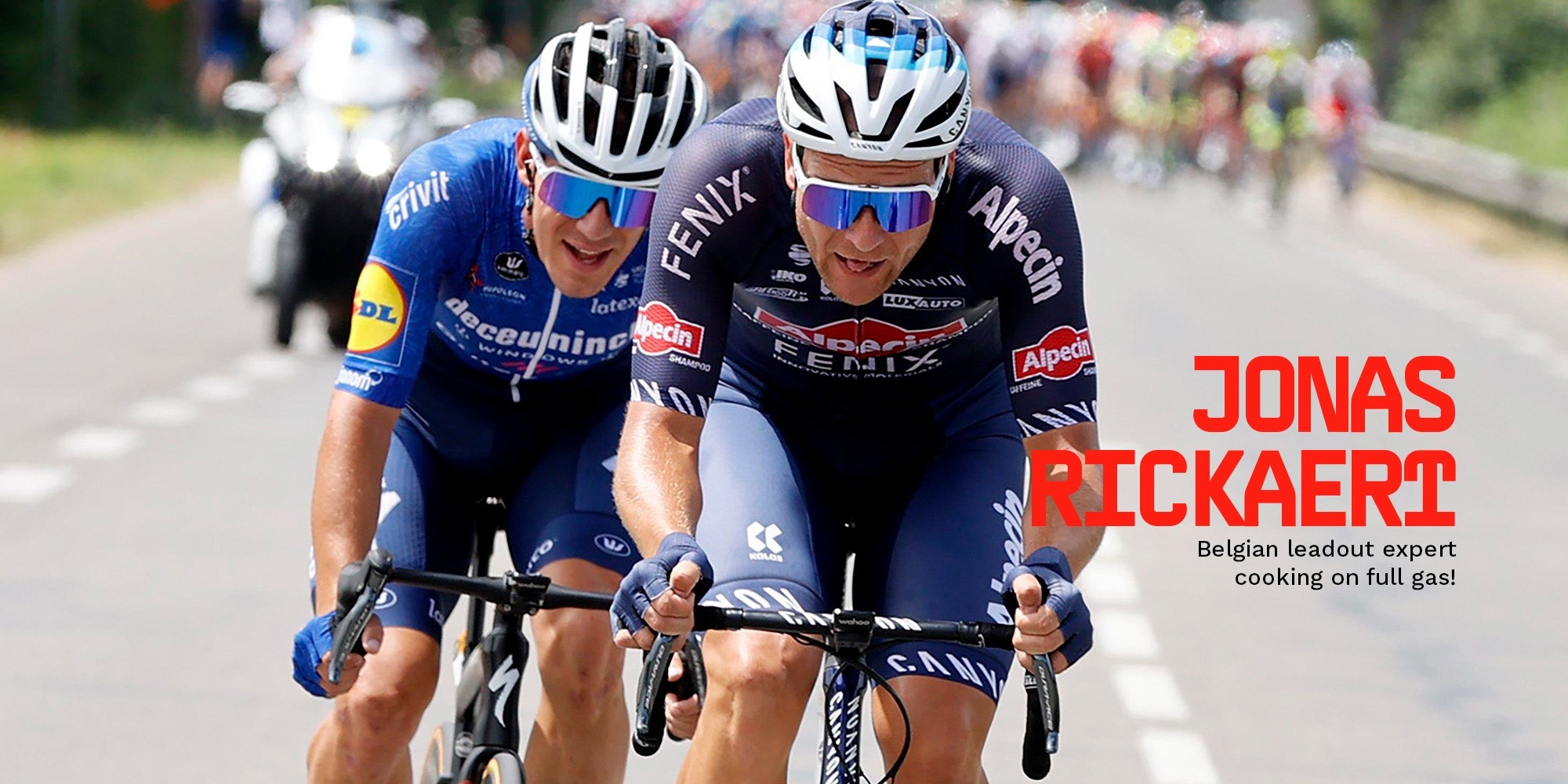 Speaking from the team hotel in the French Alps on the first rest day of the Tour de France, Alpecin-Fenix sprint leadout man Jonas Rickaert discusses a dream first week for the team, ambitions for the second half of the race, and how he’s enjoying his debut Tour de France.

The first week of the Tour de France delivered a perfect debut for Alpecin-Fenix. The results are well known: a stage win and six days in the yellow jersey for Mathieu van der Poel, and a stage win for Tim Merlier. Performing at this level is impossible without a solid foundation. This concerns not only the preparation, training, nutrition, equipment and clothing, but also the foundation of a team. Jonas Rickaert is an important part of that foundation.

“I had known for a while that I was on the long list to ride the Tour de France, but finally heard it after the last altitude training camp. It really is a dream start. I think there are many like me who would like to start in a Grand Tour the way I did," says the 27-year-old Belgian.

The start in Brittany immediately resulted in two stage victories for Alpecin-Fenix in which Rickaert played an important role, as he so often did this spring: the Bredene Koksijde Classic with Tim Merlier; the Elfstedenronde with Jasper Philipsen; and the classics alongside Mathieu van der Poel. Rickaert is always there and is greatly appreciated by his colleagues.

“I think they like to have me there. For Mathieu I bring peace and stability and I make sure that he can position himself well. For Tim and Jasper, I am the leadout. I also notice that my work is becoming more and more visible, and that people are starting to notice me, but that is of course easy if those guys get results after my work. Other than that, I don't get much attention from the media."

In the third Tour de France stage to Pontivy, Rickaert was of great value to Tim Merlier, who immediately took his first chance to win at the Tour de France after his stage victory in the Giro d'Italia.

“It was an incredibly stressful ride,” Rickaert recalls. “We knew it would be very close from the intermediate sprint, but we were in a good position, and we never ran into problems. Others crashed left and right, in front and behind us, so we decided to split up. I stayed with Tim and Mathieu stayed with Jasper. Our plan for the final was that we would find each other again and that is what happened. Mathieu did a very long turn and only stopped under the flamme rouge of the last kilometer. I yelled at him to wait but he was unstoppable! Jasper was then still behind Tim as protection but at 800 meters to go I decided to send Jasper to the front. That was the right choice because Tim finished it off nicely. It was a real challenge to race at the front because that takes a lot of energy. It's a shame that there were so many crashes, but our leadout was textbook.”

While much of the 2020 Tour de France took place behind closed doors and outside of the school holidays in September, the fans are now once again cheering from the side of the road. Rickaert is fully enjoying it.

“In the first stage we wore that beautiful yellow-purple kit in honour of Raymond Poulidor. I really loved that outfit and with the story behind it you can't help but become a fan. The public clearly loved it too and they are still standing on the side of the road with 'Merci Poupou' signs."

The weather is a recurring theme this Tour de France. The riders had little luck in that area. Brittany lived up to its reputation and was wet. Then in the second weekend followed a soaking wet and cold passage through the Jura and the Alps.

“The weather is finally nice now on the rest day, but the start in Brittany was terrible and the weekend in the Alps was bad too. I am fortunately someone who is never cold. On the contrary, I’m usually too warm. Before the start on the bus, everyone asks each other ‘what are you wearing today?’ I then answer that I am not a reliable reference point. I often don't even wear a base layer,” Rickaert says with a smile.

“But during Sunday's ride to Tignes I went to the car at summit of the Cormet de Roselend and asked sports director Michel Cornelisse for a gilet (Stratos) and a jacket (Shark). I needed that waterproof jacket then! It was intense to see riders like Julian Alaphilippe standing there being blue from the cold. I understand that time limits are needed, but that Sunday they really should have extended it a bit.”

They Ride So Incredibly Fast

Rickaert survived the tough stages in good order and is still fresh after nine days. As a debutant in a Grand Tour, he draws on his extensive experience……. as a television viewer.

“What strikes me is that they ride so incredibly fast. I did not ride at full speed in the time trial, but I still produced very decent wattages. I thought I would have finished 30th with those values, but I was 80th!”

A grupetto in an Alpine stage was also a new experience for the Flandrian, but he had few problems in the second race weekend and finished neatly in the main bunch.

“I heard here and there how it works in the grupetto in the Tour de France. This is my first Tour, but I have also followed it on television for years,” he says with a laugh.

“It is important with an uphill start not to go into the red right away, but to ride at your own pace. I was always taught to drop from the peloton later, rather than join the grupetto because later you can always fall back into that group.”

The Tour de France of Alpecin-Fenix could not have started better, but there are certainly still ambitions in the second half.

“We already tried to win with Jasper in the opening week, but we will definitely try again. We may have lost two important lead-out riders with Mathieu and Tim, but I'm confident I can position Jasper just as well. A lot of sprinters have already left so I hope a team like Deceuninck – Quick-Step will help control in the flat stages.”

Jonas Rickaert enjoys his role on the team. “It has all gone quite fast in my career, but most of all I enjoy it. I do what I love to do and am good at it. I am also proud of what we achieve together as a team. I am also starting to discover myself more and more. My most important quality is that I take care of rest and peace within the team. I can also cook very well by the way,” he adds. “I almost always do that at home, but for my girlfriend only. Not for the team. She loves my lasagna caprese and I make a very good cheesecake. With white chocolate of course!”